We examined the quandary of using gene drives to spread genetic changes throughout a population.  We discussed the science, timeline of implementation and of course questions about environmental impacts.

Driving the Future, Governance challenges for biotechnology in the age of gene drive

Concerning RNA-guided gene drives for the alteration of wild populations

The Aedes mosquito is thriving in more and more territory, moving northward and carrying with it the worrisome Zika virus. Estimates predict that 2 billion people live in areas at risk for Zika (Bogoch et al, 2016). Recent Community Conversations in Portland, OR and Seattle, WA focused on updated knowledge about Zika: who can become infected; what are the symptoms in adults, fetuses and babies; prevention approaches; new diagnostics; vaccine challenges. We also discussed in depth the research challenges in this climate of rapidly emerging information.

Zika is frightening. Not only does it impact growing babies, but it is also implicated in neurological symptoms in adults. Zika infection can result in fetal microcephaly but also causes serious deficits in brain matter. The degree of impact is likely on a continuum from obvious signs detectable by ultrasound to other cognitive and behavioral impacts not fully known until a child is born and begins to miss developmental milestones. We don’t really know the percentage of those exposed who are affected.

A few things really sparked our attendees. One, science communication needs to balance speedy publications with quality research. Because the public may not be aware that science typically moves more slowly, Zika developments require special communication that is clear and translated well. Two, even though Zika is scary it is competing with many other infectious diseases that are already proven, beyond a shadow of a doubt, to cause morbidity and mortality. Funding, public health resources and scientific expertise are all scarce resources that must be doled out justly. We didn’t figure out the formula. Three, since there is no current vaccine or therapeutic for Zika, the best thing to do is to prevent infection. Participants called on personal responsibility regarding risk-taking behavior that includes rethinking travel to Zika-laden areas. Some advocated for a boycott of the summer Olympics.

Zika basics from the CDC

August 25, 2015
reflection on "you are what you eat: antibiotic resistance from chicken to your table" portland, OR 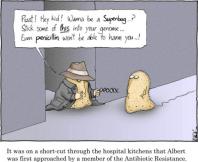 During the autumn round of Community Conversations in Portland, OR and Seattle and Spokane, WA, we discussed the concern that ongoing antibiotic use in large-scale commercial chicken farms is producing antibiotic resistant (ABR) bacteria that contribute to more difficult-to-treat human diseases.  In a 2014 report on antibiotic (ABX) resistance, the World Health Organization warns of humanity heading for a "post-antibiotic" era in which antibiotics can’t keep up with ABR and the diseases they cause.

Who are the stakeholders in this situation? Large- and small-scale farmers, consumers, researchers looking for new drugs that kill bacteria and medical professionals who want healthy patients.  With all these stakeholders, how are we to address this potential public health crisis?

The One Health Initiative holds that human, animal and environmental health are all connected.  ABX use practices in food animal agriculture are of particular interest, but not everyone agrees that there is sufficient evidence that the use of ABX in chickens (or other food animals) directly results in ABR infections in people.

Despite expected regional differences, participants in the Conversations were united in several areas.  One, we simply need more data.  The Food and Drug Administration only recently (2009) began collecting sales data for antimicrobials in food-producing animals.  No one is sure what is actually being used. Legislation attempts to limit ABX use in food-producing animals and require record-keeping both federally and in some states, including Oregon, have not garnered enough support.  Two, consumer education needs are high.  We are inundated with messaging and food labeling that is sometimes great marketing (rBST-free!—but there isn't a significant difference in the milk from cows treated or not with rBST) but low on information (how are egg-laying hens treated if they are cage free?).  Many of us still believe that if we have a cold for more than 3 days we are good candidates for antibiotics.  Three, the conversation tends to use rhetoric that is sensationalized and prevents authentic discussion.  For example, “factory farms are overusing antibiotics and are mostly responsible for this crisis.” Toxic rhetoric.

All in all, this round of Community Conversations was high in energy and commitment to better living through smarter consumption of food, data and antibiotics. Many thanks to our facilitators Kathy Hessler, JD, LL.M and Emma Newton, MS (Portland); Heather Fowler, VMD, MPH and Paul Pottinger, MD (Seattle); and Doug Call, PhD (Spokane).  Thank you to our Spokane Series Sponsor, Whitworth University.

Wal-Mart's push on animal welfare and antibiotic use

The coming crisis in antibiotics TEDMED

Top 7 Verbalized Reasons to Not Vaccinate

Required childhood vaccines in Oregon and how to apply for exemption

Learn about Immunization rates in Oregon

What would you do?  Personal and community ethics during a disease outbreak

“If we want to build community, then how should we behave to ensure that goal?”  For Rev. John Tuohey, PhD, who facilitated our recent Portland event, this is the key to decision making and ethics during a disease outbreak or any other kind of community emergency.

Over pints of craft beer and sensational pizzas, we wrestled with key questions surrounding the current measles cases in the US and the ebola epidemic in West Africa.  We learned about some differences between these two viruses.  Table conversations ranged from opinions about power, exploitation and consent for unproven ebola treatments to the emotional impact of media coverage of these infections. We explored emergency decision-making criteria developed by Dr. Tuohey in partnership with the Oregon Health Authority.  These criteria led us to think about professional duty of medical personnel, the sacrifice of personal liberty to benefit the community, and care for the most vulnerable.

Fact Sheet for "What would you do? Personal and community ethics during a disease outbreak"

A Matrix for Ethical Decision Making in a Pandemic, Dr. (Rev) John Tuohey

Ethics and Values in a Public Health Emergency, Centers for Disease Control

The five people you meet in a pandemic and what they need from you today, The Hastings Center

For the crowd that gathered at the Lucky Lab Pub, the Conversation came down to two things: 1) what is the balance between individual rights to information and Food and Drug Administration (FDA) device regulation with direct-to-consumer genetic testing like that provided by 23andMe? and 2) how will individuals interpret and act upon information they receive from direct-to-consumer genetic tests?

Summer Cox, from the Oregon Health Authority Genetics Program and Shaban Demirel, from Legacy Research Institute, facilitated this Conversation. Summer provided expert information and Shaban reflected on his personal experience using the 23andMe service before its range of health-related services were disallowed.

Some people felt an absolute right to be able to purchase a genetic testing service and receive information about their health risk for diseases, the way their body processes drugs like statins and caffeine and whether they have or ‘carry’ any inherited conditions. After all, “it’s not the FDA’s role to censor knowledge.” There was little debate in the room about the accuracy of genetic sequencing itself; rather people were concerned about the validity and reliability of the meaning of the genetic data provided by 23andMe. Some meaning for raw genetic data was based only on studies of 750 people, maybe not a large enough sample for statistical power; some diseases are not well-studied enough to have full knowledge of the genetic input. The more serious a condition, the higher the stakes for accuracy. Among those concerned, one laid bare the issue using a relatable gasoline analogy: “You want the government to protect you against the bad guys. If you pull into the gas station and buy a gallon of gas, you want it to be a gallon, and you want it to be gas!”—this is the same reason the FDA has ordered 23andMe to stop providing health-related genetic information to consumers—they want the genetic tests to do what they promise and do so accurately.

But then again…is genetic sequencing and interpretation really a device? Maybe the ‘book of regulations’ isn’t broad enough in scope to cover this kind of test.

Attendees were also mindful that once these test results land in your lap, how will you take the information? How will you respond? The company 23andMe is very aware of this concern and when they previously offered the health-related tests, they directed the consumer through a series of deeper and deeper consent to learn their genetic information on more and more serious conditions. As Shaban pointed out, “you cannot unlearn this information.” At one time, 23andMe offered predicted health risk for 122 diseases and 53 inherited conditions. That’s a lot of data to take in for oneself and/or ones children. “What if one of your results is really important? 122 traits? It’s overwhelming emotionally. It’s expensive to follow up on.” Attendees agreed that most people react emotionally first, before their rational brain kicks in to consider the information.

Along the same lines, attendees raised the concern that the meaning of predicted risk for a condition or disease will be read differently person to person. Most people lack a strong understanding of ‘risk.’ Some may be truly scared when they read of their three-fold increased risk for atrial fibrillation over the general population; some will read further and see this only elevates their risk from 1.7% to 5%, which is a small number—but others will be hung up on the three-fold higher risk and panic.

And yet, with all this, attendees acknowledged that there is uncertainty in all things like this—in the meaning of our genetic information and the meaning of health-related tests we take at the doctor’s office. “The public has an inflated sense that the answers our doctors give us are black and white. Maybe bringing to light the uncertainty is a good thing.”

We also shared some laughs. An attendee shared with the whole group that when he was diagnosed with glaucoma, he was in disbelief. He couldn’t process the reality of that diagnosis-given in his doctor’s office– and imagined that many people sitting with 23andMe data might feel the same way. He went so far as to say that he was proposing alternative diagnoses, “Maybe I just have a really big optic nerve!” And that is when another attendee urged from the other side of the room, “Own your phenotype!” The room erupted in laughter.

In the end, we weighed and applied the ethics principles of autonomy and beneficence, enjoyed our pints and chips, joked about hairy big toes—and Hobbits– and dry earwax, and got one another thinking. Some people sent away for 23andMe testing kits. Some wished they could still receive health-related genetic information from 23andMe. And the rest of us went away wondering if we really receive a gallon of gasoline when we pay for one.